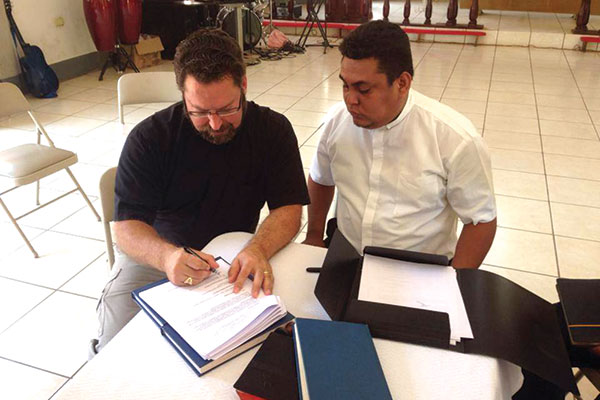 NICARAGUA – The Iglesia Luterana Sínodo de Nicaragua (ILSN) and Lutheran Church–Canada (LCC) signed a protocol agreement with The Lutheran Church–Missouri Synod (LCMS) on May 13 in Chinendega, Nicaragua. The agreement will allow the three churches to better coordinate their mission work together in Nicaragua, as well as in mission areas in Honduras and Costa Rica.

Representing the ILSN at the signing was its President, Rev. Marvin Donaire. Rev. Dr. Leonardo Neitzel, Executive for Missions and Social Ministry, represented Lutheran Church–Canada while the LCMS was represented by Rev. Dr. Albert B. Collver III, Director of Church Relations and Regional Operations.

Lutheran Church–Canada’s President, Rev. Dr. Robert Bugbee, hailed the signing. “This agreement among [the] Missouri Synod, LCC, and ILSN is a huge encouragement to all of us who care about a faithful Lutheran presence and outreach in Central America,” he said. “When partners refrain from duplicating each other’s efforts in a given country, but instead coordinate resources and consult intentionally, the capacity of each partner is deepened greatly. I thank God for the intensified cooperation between LCMS and LCC in recent years, and hope this Nicaraguan agreement will be an inspiration to other biblical Lutheran churches to work together in many parts of the world.”

The ILSN was born out of the mission work of Lutheran Church–Canada. LCC began mission work in Nicaragua in the spring of 1998. Just over ten years later, the ILSN was officially founded. Today the church has 23 congregations, 12 pastors, 12 vicars, 36 deaconesses, and about 1,800 members. It also has four missions, two church plants in Honduras and two mission plants in Costa Rica.

While LCC enjoys altar-and-pulpit fellowship with the ILSN, the LCMS and ILSN have never officially achieved the same level of partnership at the church-level. “Eventually, the LCMS will take a similar action to the LCC,” Rev. Dr. Collver explained. “In the meantime, as a mission start of an LCMS partner church with whom the LCMS is cooperating in the mission work, the LCMS is in de facto altar and pulpit fellowship, meaning that the ILSN is regarded for fellowship purposes as if it were an LCMS mission start.”

With files from the LCMS Reporter