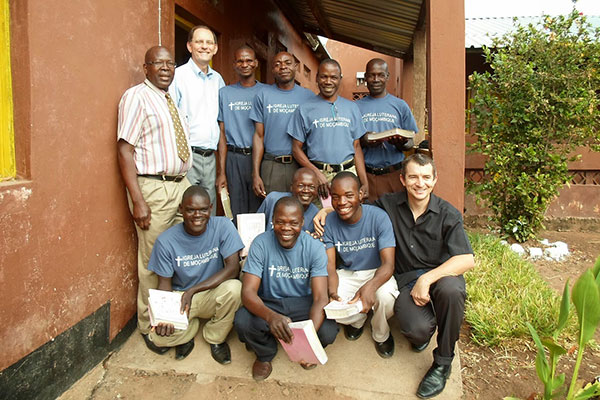 MOZAMBIQUE – Thanks to the work of numerous partners, Lutheran missions in Mozambique continue to flourish. Three new congregations have been established in the past year, with more than 100 people attending the first service in each new village.

The Mozambique Lutheran Church has no pastors of its own, so ministry is overseen by eight local men preparing for ministry. These men are all students in the Theological Education by Extension (TEE) program, and recently received the certification as deacons after completing their most recent round of intensive studies in July. The TEE program is organized by the Evangelical Lutheran Church of Brazil (IELB), and brings instructors from other countries to offer theological education in Mozambique. The eight students will complete their studies in 2015 and be ordained to pastoral ministry the same year.

The day of their ordination cannot come soon enough: in 2012, one Brazilian pastor reported being called upon to perform nearly 300 baptisms while visiting Mozambique as a TEE instructor. The newly appointed deacons are now allowed to perform baptisms in addition their current duties (which include leading services, preaching, teaching, and counseling). But even as these students prepare for ordination, plans are underway for the beginning of a new TEE class of students. By July of this year, twenty students had already enrolled for the new class, set to begin in 2015. There are also plans for the construction of a new building, the Concordia Lutheran Center, to continue theological education in the future.

These developments in Mozambique will be guided through a new Memorandum of Understanding (Addendum) signed this past July by partners in the TEE program: the IELB, the current TEE students, the Kuwangisana Organization, the Kapasseni Project, the Free Evangelical Lutheran Synod in South Africa, and The Lutheran Church—Missouri Synod.